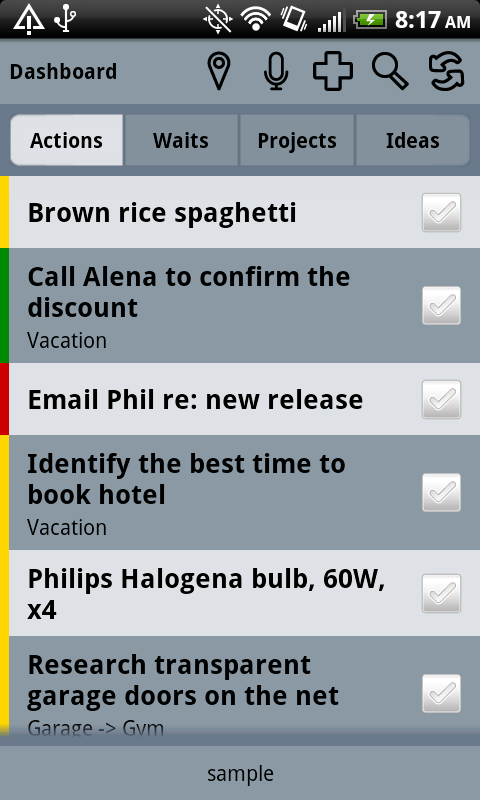 At the core of ActionComplete is management of four types of tasks: Actions (next actions in GTD parlance), Waits (Waiting for), Projects, and Ideas (Someday/Maybe).

The tasks can be assigned three types of metadata: tags, people, and places. Together the metadata form a context that can be easily filtered upon.

People are Google Contacts and the contact record linked to a task can be readily accessed right from ActionComplete applications for Android phones.

Places in ActionComplete allow to attach location context to the tasks. Vicinity view available in ActionComplete applications for Android shows the tasks that can be done nearby and suggests geographical features with names similar to ActionComplete place names. E.g. if there are tasks linked to places "WalMart" and "Starbucks" the Vicinity view will show all nearby WalMarts and Starbucks. From there one can view the Google map of a particular location and use a wide array of functions provided by Google Maps such as GPS-based navigation and user reviews.

ActionComplete web apps are rich Internet applications. They provide sophisticated user interface characteristic of desktop applications while being available via a browser from any Internet-connected computer, notebook, netbook, or tablet.

ActionComplete 2 web applications sport a menu-based user interface and add a number of new features such as export/import to/from comma-separated values (CSV) files and export to printer-friendly HTML format that can be used for printing and reports.

ActionComplete applications for Android provide ActionComplete functionality on the go. They leverage a number of smartphone hardware features, such as location awareness and voice input, to enrich the users experience and provide unique application features.

The Vicinity view described above is available in both free and paid versions of ActionComplete for Android.

In addition to that ActionComplete Pro for Android supports voice entry for tasks. ActionComplete not only allows one to say the task name. It also understands places, due dates, and reminder times. E.g. saying "paper towels at walmart or target" will produce a task "paper towels" and link it to places "walmart" and "target" creating them as needed. One can also say something like "call john on March 5 at 1430". That will create a task "call john", assign it due date of March 5, and create a reminder on March 5 at 2:30PM.

ActionComplete Pro for Android comes with a configurable widget that can be setup to show Actions, Waits, Projects, or Ideas. The widget allows the same operations as the main application right from the phone home screen.

ActionComplete Pro is ad-free and costs $4.99. It's available at Android Market.

ActionComplete for Android is available at Android Market at no charge.

ActionComplete system is more comprehensive (and GTD integrated) than anything else out there that I've found. For managing hyper focus and the next action review for a project the interface is clean and easy to use. In other words, one less taxing thing on my mind, which is what GTD is all about.


As the owner of a busy web development company, I struggled with managing multiple projects and tasks.  I read "Getting Things Done" and I needed a solution that would seamlessly work with my droid, plus have the option of accessing from the web.  ActionComplete fits the bill perfectly!  It's easy, simple, and keeps me on track in a way that doesn't unnecessarily bog me down.  In other words, I don't spend my day managing my to-do's, like I did with some other apps.  The pro version is beyond a doubt the best $20 per year I have ever spent.


When I first read Getting Things Done, it changed my life. For the first time, I felt in complete control over my work. I accomplished relentlessly. The problem with GTD is finding a 'trusted system.' This is it! ActionComplete has replaced all my notecards, lists, and agendas. I grab my phone or the web and go. Well worth the pro upgrade.


I've been with AC from close to the very beginning and watched it develop into the amazing resource (not app) that it is now. I think now is the time for us to really get with the AC Wave and say THANKS for a brilliant, helpful, adaptable and yet approachable app.


I just wanted to let you know that AC is the reason I got a smart phone. So thanks for the extra 40.00 a month on my phone bill. :) It's worth it. I'm new to GTD and will make AC the core of my system.